The Miracle of Israel and President Truman 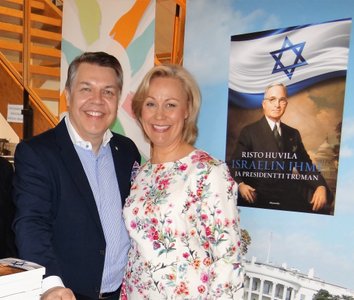 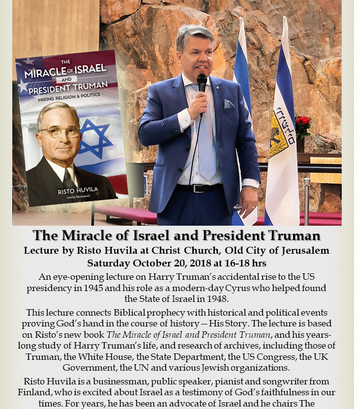 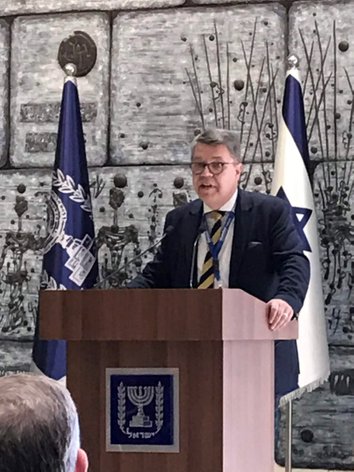 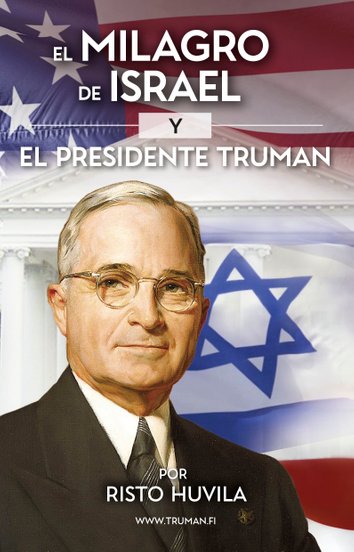 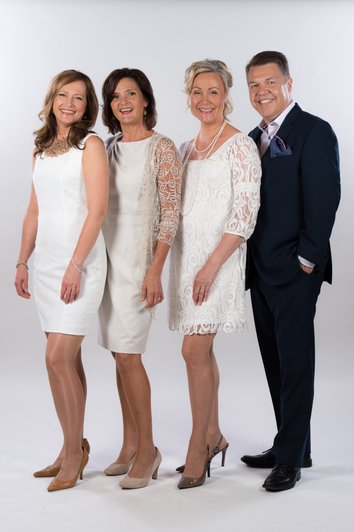 For years, Risto Huvila, a businessman, public speaker and songwriter from Finland has been interested in Israel and her role in Biblical prophecy and history. One of the key themes in his research has been about Harry S. Truman – the accidental president – and his critical role in the founding of the State of Israel during the years 1945-1948.

From 2007 to 2013 Risto was in charge of the US operations of a Finnish technology start-up, which took him frequently to the States. In 2012 he flew to Kansas City to meet a major customer, after which he ended up at the Harry S Truman Presidential Library and Museum in Independence, just a few miles from Kansas City.

The story of Harry Truman became a life-changing event for Risto and since then he has spent countless of hours researching and studying Mr. Truman's life, career and presidency through various biographies and archives, including those of the president, the State Department, the UK Government, and the UN.

Based on his findings, Risto has prepared a lecture package, which drills into events and their backgrounds during 1945-1948 in Washington, London, the UN and Palestine. Risto’s presentation highlights events related to the independence process within the Truman administration, and it also unfolds Mr. Truman’s personal Christian faith and incredible life developments that made him probably the most unlikely president ever.

Without knowledge of the biblical prophecies related to Israel and the return of the Jewish people to their ancient homeland, and Harry Truman’s attitude to them, the president’s actions would have seemed just normal political maneuvers, but the story is one of the most important events in modern history which proves the reliability of the Bible and confirms the role of Israel in the plans of the Almighty.

In addition to Harry Truman, the book also features leaders who characterized the rise of Zionism and paved the way for the promised land in Palestine prior to Truman, including Winston Churchill, Theodor Herzl, David Lloyd George, William Hechler, William Blackstone, Louis Brandeis, Chaim Weizmann, Arthur Balfour, Woodrow Wilson, Charles Spurgeon, etc. In his book, Risto  also opens up the Vatican’s continued opposition to the founding of the Jewish state in Palestine.

The fascinating story of President Truman has been well received: since 2012 Risto has been sharing the Truman story in hundreds of events in Finland and abroad, including USA, Israel etc., and radio and TV shows. In August 2016 Reader’s Digest (Finnish edition) published Risto’s article President Truman and Israel, and based on it, Aikamedia, a major Christian publisher in Finland challenged Risto to write a book about Truman,  which was launched in April 2018 in Finland. The English version The Miracle of Israel and President Truman was launched at the Jerusalem Prayer Breakfast  in June 2018. The Spanish version El milagro de Israel y el presidente Truman will launch in 2022.

Risto has lectured on various Israel-related themes since 2006 in Finland and abroad, including ISrael and the US. Risto has also produced and hosted Israel-related TV programs for AlfaTV and TV7, including a lecture series Israel in prophecy and history, with an episode on President Truman. In 2018 Revelation TV (UK) made a one-hour interview with Risto focusing on Harry Truman. Watch the interview here.

Risto is also a blogger at the Times of Israel, the leading English-speaking news site in Israel with a monthly readership of 3,5 million. Additionally, Risto writes a blog at the largest evangelical news site in Finland, seurakuntalainen.fi.

Risto is Chairman of The Federation of the Finland-Israel Associations, and Vice-Chairman of the Finnish Holocaust Remembrance Association, and March of Life Finland, being also a graduate of Yad Vashem International School for Holocaust Studies in Jerusalem.  Risto  coordinates the Israel ministry in his church since 2009 and has organized annual Israel today conference with a holocaust remembrance day event  since 2010.

Because of his vast knowledge on Israel and the Middle East affairs, Risto has been an advisor to many politicians, diplomats and journalists.

Risto is also a pianist and songwriter, and the founder of Risto Huvila & The New Song, a Christian vocal group that was born in 2010. Its repertoire consists of songs – totaling over 120 by 2018 - for which the melodies and lyrics are all written by Risto. Most of the texts are based on biblical themes, and many of them are about Israel and her prophetic destiny. Many of Risto's songs have been translated into English. The New Song made a concert tour in Israel in October 2018.

You can reach Risto at risto@truman.fi